Cloud computing is an exciting suite of technologies that has come to dominate the discussion of computing for two main reasons:

Cloud computing can deliver flexibility and cost savings because it is uniquely capable of being scaled to the "right size" for a particular environment, no matter how frequently usage of the environment expands or contracts. Taking advantage of this flexibility can be difficult; however, some companies try to do it manually, while others create a custom automated system. Either method has the potential of introducing new challenges into your environment:

As with so many of its other services and products, Amazon Web Services (AWS) created Auto Scaling to solve its own scaling issues, and now provides the service to its customers for free. On its own, Auto Scaling monitors your environment to ensure that the desired systems stay running. What is even more powerful is that you can tie the Amazon CloudWatch monitoring service into Auto Scaling, which allows your environment to automatically scale up or down based on current conditions:

This paper describes what Auto Scaling is, when to use it, and provides an example of setting up Auto Scaling.

What is Amazon Auto Scaling?

Using AWS to meet your business needs is easy because of free services like Auto Scaling. Without Auto Scaling, you may have no problems configuring an initial environment in AWS, but dynamic growth can quickly exceed your existing team's ability to respond. Hiring enough operators to respond to your computing environment's conditions 24/7 is too expensive. Guessing the proper environment size means that the systems are probably over-provisioned, which wastes money. Finally, ensuring that all the systems you want running are actually operational can be overwhelming, especially if an Availability Zone (AZ) fails.

Auto Scaling allows you to specify a server group, called an Auto Scaling Group (ASG), in which you define:

When you complete the ASG definition, Auto Scaling starts the number of servers you specified. The system distributes the servers as evenly as possible across the designated AZs.

If any server stops working, the ASG replaces the server. If an AZ goes out of service, the remaining AZs have their servers increased to the specified amount.

Because an LC is just a description of an EC2 runtime, one LC can be used in multiple ASGs. A particular ASG can have only one active LC, but the LC can be changed at any time, even while servers are running.

In defining where to run the instances described by the LC, the ASG lets you specify one or more AZs within a region in which to run. Because each AZ is essentially its own data center, this means the ASG can guarantee that the EC2 instances it controls will always be running. In addition, the ASG can be associated with an Elastic Load Balancer (ELB) and guarantee that the ELB will always have a healthy pool of servers behind it.

The number of EC2 instances that a policy can add to or delete from an ASG is limited by the maximum and minimums set in the ASG.

A Scheduled Action (SA) is an action that is triggered at a specific time to decrease or increase the number of EC2 instances running in an ASG. An SA can be defined to run at a specific date and time, or to run at a recurring time and date. For example, you can set an SA to run at the end of a workday to run a minimum level of servers, and another SA to run at the beginning of the workday to increase the number of servers to hold load during the workday.

When to Use Auto Scaling

Auto Scaling is appropriate for many diverse scenarios, but these are the most common:

These scenarios are described in the following subsections.

When you define an ASG, it immediately starts the number of servers you defined. When all the servers have started, the ASG monitors them; if any fail, the ASG starts new servers to replace them as defined by the LC.

If you want your servers to be highly available, make sure to define multiple AZs in your ASG. This causes the ASG to start one EC2 instance in each AZ up to the minimum or defined number, and protects you as follows:

Thus, without any additional configuration, you are guaranteed that the ASG keeps your servers running until it runs out of defined AZs. Because there is no cost or compute burden in having multiple AZs, it is highly recommended that you include all of a region's AZs in every ASG.

Using Amazon Auto Scaling means that you can guess at an initial usage level and let Auto Scaling make the corrections necessary to meet the actual usage of the system. Simply identify an Amazon CloudWatch metric (such as latency at the ELB, or CPU utilization averaged across the ASG), and use policies to change the ASG to react to the metric.

Your environment is now running using the new LC and the new EC2 instance type.

Because you can use Auto Scaling to expand or contract your environment as conditions change, you can control costs. As in the previous scenario, you can use Amazon CloudWatch to specify metrics that indicate there is too much capacity, and decrease your environment's size. If the EC2 instances are too expensive for the compute power needed, just change the instance type in the LC and swap out the instances.

If you distribute your systems as fully integrated AMIs, or as AMIs that can self-configure on boot, you can create a new LC that uses the new AMI and change the ASG to use the new LC. Then, as previously, use a policy that increases the size of your server fleet by 100%, and then once all the instances are booted, decrease the fleet by 50%. By default, the ASG drops the instances that were started with the old LC, meaning that your fleet is completely updated.

An Example of Setting up Auto Scaling

This section provides an example of how to set up Auto Scaling for the most common scenario: using Auto Scaling with an ELB to handle incoming load traffic.

Note: This example assumes that you have some experience in starting EC2 instances. If you do not, please take advantage of the free training videos and labs provided by Amazon at this link: http://aws.amazon.com/training/intro_series/

The Auto Scaling environment created in this example consists of the following elements:

This example environment is accomplished by creating an LC, an ASG, and Auto Scaling Policies. However, it does not include any Scheduled Actions (SAs).

Note: This example is an illustration of the process so you can see the minimal scope of effort involved. It is not a step-by-step tutorial. For detailed steps, see the Auto Scaling documentation at http://aws.amazon.com/documentation/autoscaling/.

To create an LC, this example starts the AWS Management Console and displays the EC2 screen for its region. At the bottom left of the screen, either Launch Configurations or Auto Scaling Groups is clicked, which launches the Welcome To Auto Scaling screen: 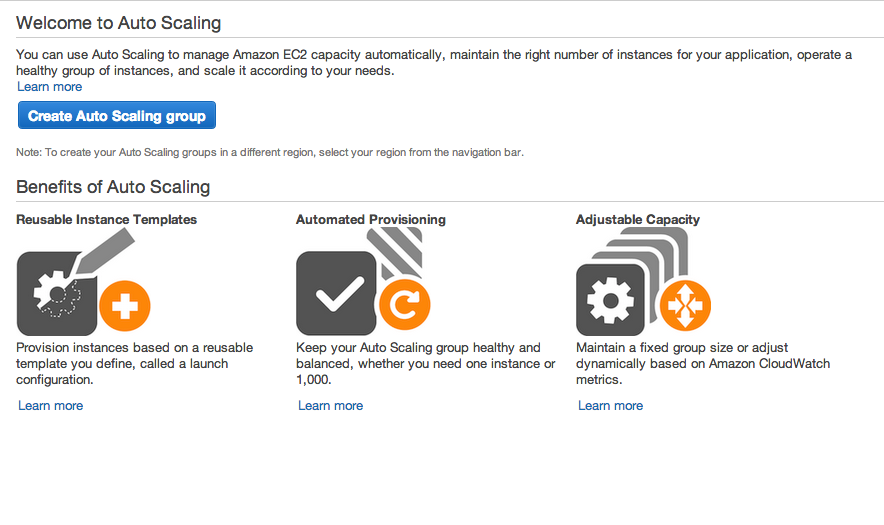 The Create launch configuration option is clicked. In the next screens, the following choices are made:

In the Configure Details screen, the LC is named web-server-lc:

The Review button is clicked so that the LC's setup can be reviewed, and then the Create Launch Configuration button is clicked. When prompted to provide the name of the key to start the EC2 instances in this LC, the key pair named ndh-webserver-key is chosen: 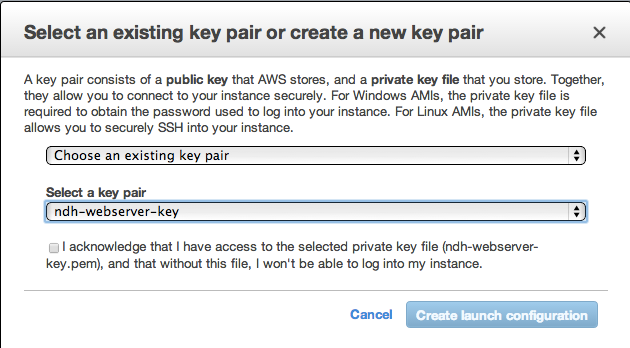 After the LC is created, the Create Auto Scaling Group wizard begins, starting with the Configure Auto Scaling Group Details screen. In this example, the previously created web-server-lc is used as the LC; the ASG is named web-server-asg; the number of instances to start with is 2; the AZs to run in are us-west-2a, us-west-2b, and uswest-2c; and the ELB to attach to is TestELB: Next, the Configure Scaling Policies screen displays. This is where you make your ASG dynamic, by setting policies for increasing or decreasing the number of servers automatically, and by tying those policies to Amazon CloudWatch conditions.

The example continues by electing to add a new alarm to this policy. This alarm triggers if the Average of CPU Utilization for the ASG is >= (greater than or equal to) 90 percent for at least 1 consecutive period of 5 Minutes (unlike traditional servers, you don't have to leave safety margins for EC2 instances):

Back in the Configure Scaling Policies screen, the Decrease Group Size section of the screen is also used in this example:

A new alarm is added to this policy as well. This alarm triggers if the Average of CPU Utilization for the ASG is <= (less than or equal to) 70 percent for at least 1 consecutive period of 5 Minutes:

At the end of the process, the Review screen is used to check the ASG before the Create Auto Scaling Group button is clicked, which launches the ASG. The example's Review screen looks like this: 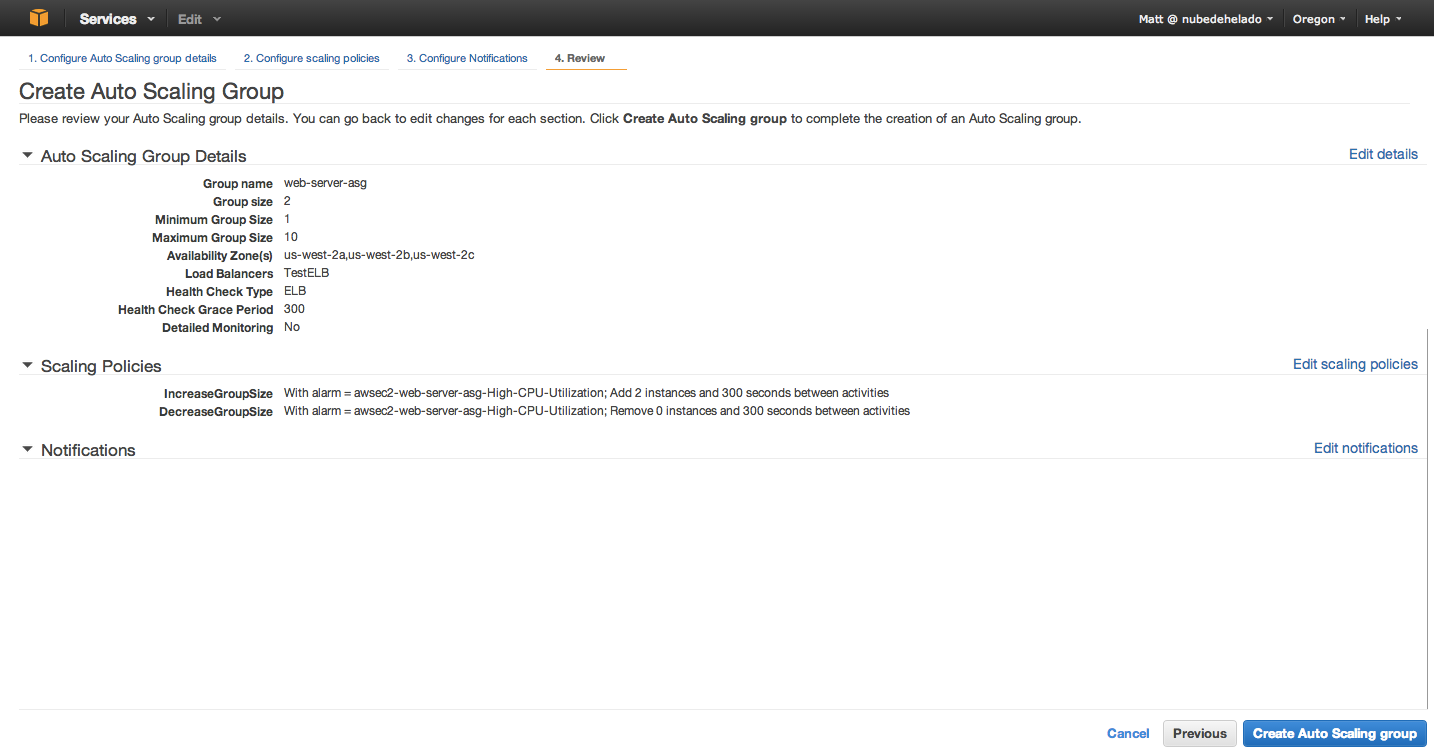 Cloud computing promises to revolutionize computing environments primarily by allowing those environments to meet demand in flexible and inexpensive ways. If it's needed only once in a while, it can be easy to manually spin up more capacity to meet demand, or to manually eliminate unneeded capacity. However, doing so quickly and accurately every time it should occur in your environment can become costly: you may need to hire a staff of operators, or you may need to develop software to manipulate your cloud capacity.

AWS has introduced Auto Scaling so that you can take advantage of cloud computing without having to incur the costs of adding more personnel or building your own software. You can use Auto Scaling to scale for high availability, to meet increasing system demand, or to control costs by eliminating unneeded capacity. You can also use Auto Scaling to quickly deploy software for massive systems, using testable, scriptable processes to minimize risk and cost of deployment.

Jon M. Gallagher has decades of experience creating and running large-scale software systems for the web and for enterprises. He has been using Amazon Web Services since its introduction in 2006.