Over the past several years, virtualization has gained dominance in IT across most industries, allowing organizations to consolidate server resources, increase deployment responsiveness and reduce overall IT costs. Recently, Gartner reported that 75% of all x86 workloads are now virtualized. Further, the Wall Street Journal recently reported on a Protiviti survey which indicated that virtualization is one of the top priorities for IT decision makers, outstripping hardware upgrades and even security. Virtualization of servers and applications is clearly the driving paradigm for IT growth and management for the foreseeable future.

The Protiviti survey found that the drivers for increasing virtualization budgets are primarily scale and efficiency: "About 64% of respondents said their IT transformation projects are aimed at simplifying existing systems and reducing costs, while 55% noted enabling new functionality as a driving force."

While these budget-friendly attributes of server virtualization are widely accepted as fact, there is considerable confusion when it comes to the best way to approach management of virtualized IT resources for maximum availability and performance. After all, what good is saving money on hardware if you're not able to manage your critical business services after they are virtualized?

Here's the core of the problem. IT professionals feel challenged to manage their physical IT infrastructures as those environments increase in scale and complexity. But they are unsure about what they need to do for virtualized IT infrastructures.

While virtualization does reduce the number of physical servers, it does not necessarily simplify monitoring. This is because of three main reasons: 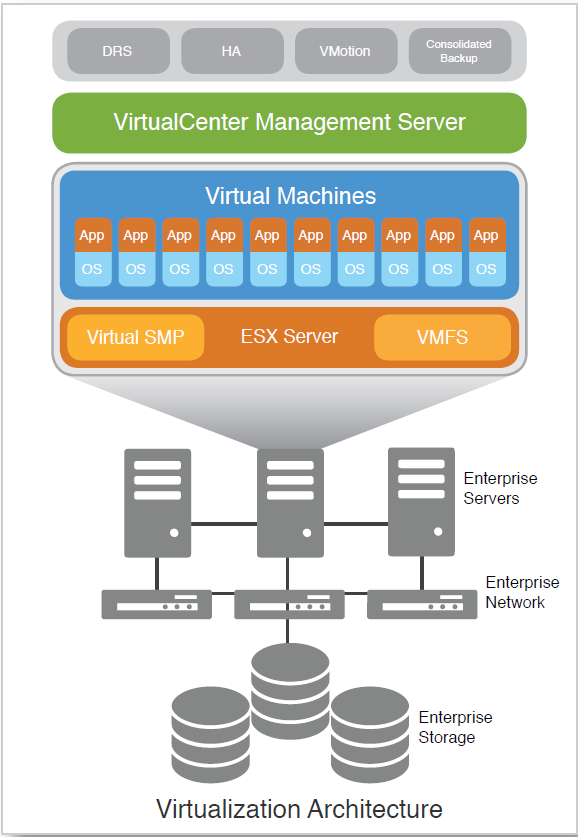 Figure 1: The number of elements to be monitored is more than that in a physical infrastructure

From a management standpoint, virtualizing an infrastructure is like putting a number of eggs into one basket!

MYTH #2: Resource reservation can be used to ensure that one VM never interferes with the performance of another

TRUTH #2: Resource reservation in a virtual infrastructure is not always possible nor is it an effective performance solution.

Most real-world implementations of virtualization do not use resource reservation. This is because statically reserving resources for a VM prevents all other VMs from using the reserved resources even when that VM is idle. This significantly reduces the resource-sharing benefits that virtualization offers. Consequently, in realworld implementations, static resource reservation is not common.

When multiple VMs share the resources of the same physical server, it is possible that one of the VMs may experience a surge in requests that could impact the performance of other VMs hosted on the same physical server. In the example below, a media server and an Oracle database are hosted on the same physical machine. When a number of users access videos from the media server, the high load could choke the physical server, thereby slowing down all accesses to the Oracle database server as well. Thus, we can see that unlike in a physical infrastructure, virtualization introduces new forms of inter-dependencies that need to be taken into account when managing such infrastructures. 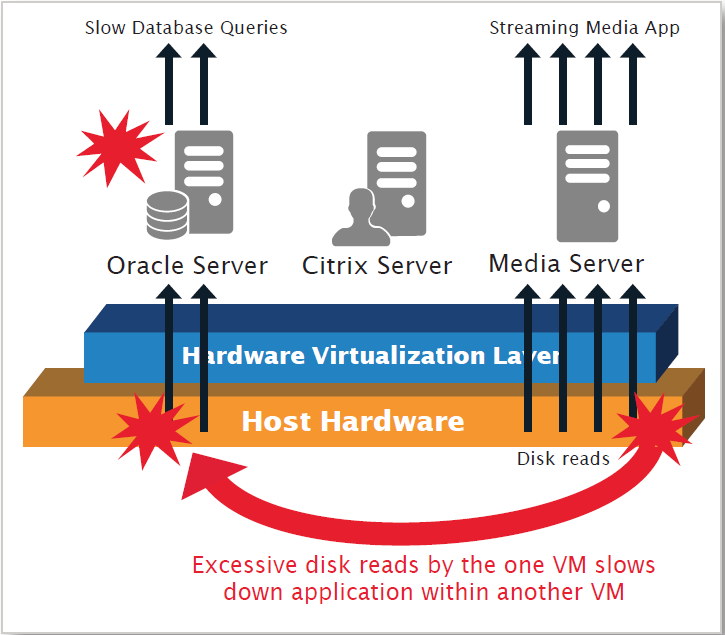 MYTH #3: Virtualization is just another infrastructure tier. It can be monitored and managed independent of other software and hardware tiers that support business services.

TRUTH #3: Virtualization monitoring must be integrated into business

This typical silo-based approach to monitoring leads to significant operational inefficiencies. Because VMs running on the same physical machine share the physical resources of the machine, a malfunctioning VM assigned to one business unit could impact the business service of another unit. To illustrate this better, consider the example below. Figure 3 shows the topology of a business service. In this example, the SQL database server is having a problem and as a result is impacting the web front-end (as seen by the orange color code; green indicates normalcy).

Figure 3: Topology of a business service showing the applications and devices involved in service delivery and the interdependencies between them.

Figure 4 shows that the SQL database is actually running in a VM that is hosted on a physical machine. This virtual topology highlights that the performance of the VMs is possibly being impacted by a critical issue with the physical machine. 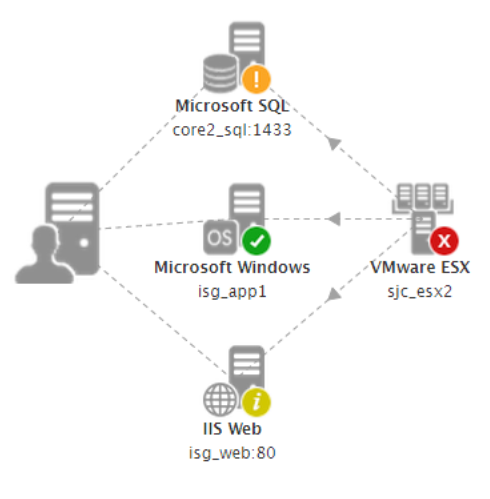 Figure 4: The virtual topology view showing the applications that are running on VMs hosted on the same physical machine

Figures 5 and 6 provide additional details, revealing that a CPU bottleneck on the physical machine caused by a backup job running on the service console VM is causing the SQL database to be slow. 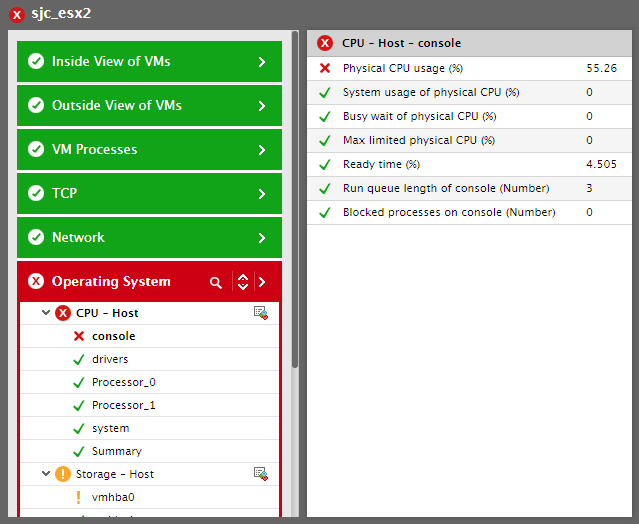 This example highlights the importance of always managing virtualization in the context of business services it supports. With only siloed views, the business team would have focused on how to resolve the SQL server performance problem, without being aware that the issue is actually the result of a backup job running in another VM. Seen in isolation, a backup job running on the service console is not an alarming occurrence, but the fact that the backup job is running during the day and is impacting the performance seen by all VMs on the physical machine is what makes the problem significant. If the VM administrator had information about the effect of the virtual infrastructure on the business service's performance, he/she could have taken preemptive action to resolve this issue before any impact occurred.

Figure 6: Detailed diagnosis reveals that a samba backup process is responsible for the CPU spike on the console OS

MYTH #4: Virtualization platforms include all the tools needed to ensure that the platform is well tuned and operating as expected.

TRUTH #4: Virtualization platform metrics show only the "outside" view of each VM.

Virtualization platforms have only an "outside" view of a VM. This view reveals the portion of physical resources that each VM is consuming. What this outside view does not reveal is what is happening within a VM. For example, the outside view does not indicate whether a resource spike of a VM is being caused by a runaway process or whether it is being caused by user load on the VM. To be able to diagnose performance problems in a virtual infrastructure, it is essential to have an "inside" view of a VM that reveals exactly the portion of a VM's virtual resources that each application is using.

To understand the importance of the inside view of a VM, consider figures 7 and 8. Figure 7 shows that a specific user's VM is taking up a lot of CPU. This is the outside view. 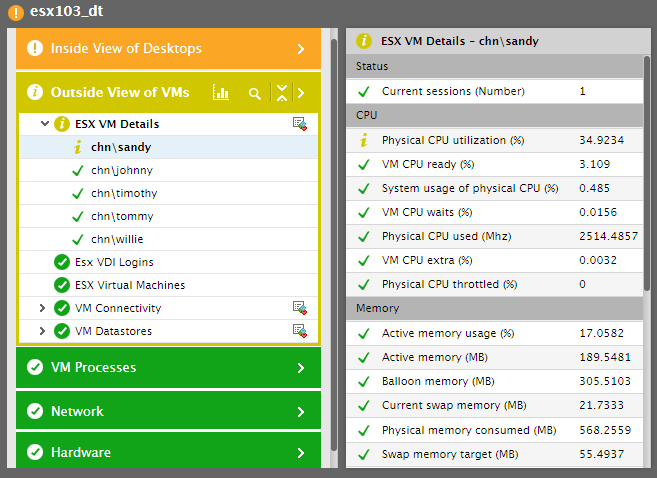 Figure 7: A specific user's VM (sandy's) is taking 35% of the physical CPU of a server

Figure 8: The Windows Media Player application is responsible for the high CPU usage on sandy's VM

Figure 8 shows that the CPU has spiked on a virtual desktop specifically because the user is running Windows Media Player. Without an inside view into each VM, we cannot explain why CPU usage is high on one desktop but not another.

It is important to understand that the workload of a virtual desktop is dynamic and depends on the user who is logged in to that desktop. Therefore VDI monitoring needs to be based on user activity, not just VM activity. Also, the virtualization platform is only one of the many possible tiers in a VDI. End-to-end VDI monitoring requires monitoring all of the components supporting the VDI, including connection brokers, terminal servers, profile servers, license servers, and more.

And finally, while agent-based monitoring is reasonable for virtualized servers, an "agentless" method is more practical for seeing inside thousands of dynamically provisioned desktops. If you are deploying VDI, don't try to use an existing virtual server monitoring solution as is. Rather, look for a monitoring solution that is specialized to handle the unique characteristics of VDI.

Now that you know the truth about virtualization, you need a performance management solution that matches reality.

eG Enterprise is the only solution to provide a 360° view of a virtualized server and its VMs. Instead of monitoring virtualization as another infrastructure silo, it analyzes virtualization performance in the context of the business services that it supports. Administrators can proactively discover issues, diagnose and fix them quickly, and keep users happy.

Its key features include:

Virtualization Management as an Integral Part of IT Service Management

Instead of monitoring virtualization as an independent infrastructure silo, eG Enterprise analyzes and automatically correlates virtualization performance with that of the other tiers supporting an IT service.

eG Enterprise auto-discovers inter-application, application to VM, and VM to physical machine dependencies and uses this mapping for prioritizing alerts. This unique approach delivers deep, actionable insights into the true causes of IT service performance issues, and enables administrators to pre-emptively detect, diagnose and fix issues before end users notice.

Setting up the monitoring is a breeze. Licensed per server (not by cores or sockets) and with the ability to monitor the hypervisor, VMs and their operating systems with a single license, eG Enterprise offers great value for money.

eG Enterprise is the only automatic root-cause diagnosis solution for virtualized application infrastructures. Its patented correlation engine analyzes and correlates performance across every tier of the infrastructure and helps administrators identify the exact cause of performance issues - whether network, database, application, VMware, Storage, or other.

With eG Enterprise's virtualization-aware monitoring capabilities administrators and helpdesk staff can immediately arrive at a reality-based solution: Namely, the exact root-cause of an application performance problem across all layers and tiers, with just a single click.

eG Innovations is dedicated to helping businesses across the globe transform IT service delivery into a competitive advantage and a center for productivity, growth and profit. Many of the world's largest businesses use eG Enterprise Universal Insight and Correlative Intelligence technologies to enhance IT service performance, increase operational efficiency, ensure IT effectiveness and deliver on the ROI promise of transformational IT investments across physical, virtual and cloud environments.